here is always somewhere else

One day he decided to make a very long sailing trip

in search of the miraculous

*he was the fourth element 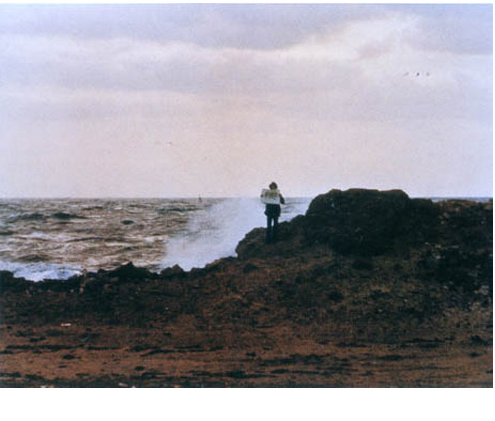 i’ve been trying to keep life quite beautiful. by now we are making wooden furnitures by ourselves. flowers and herbs flourish in the garden. it makes the house so lovely! from time to time my son and i glimpse a butterfly with its tiny and colored wings. and my son runs to take his little camera. most of times the small insect flies along the air before he can picture it. and he starts laughing. *butterflies and children are easy images, don’t you think so?* it is delightful anyway, children and butterflies. it’s the end of the winter and the days are pretty cold. i can’t sleep well. nights have been so long. actually i could never sleep well. i belive that is why i started reading, and after some time writing. i’ve written far less than i wish, though. when we start living things it becomes difficult to write about them. such as love. it is essential its abcence to write about it. by now, my sweet, i’m just thinking about men and women working day by day, about this unusual wolrd around us. that is why i still walk with bare feet. it is my resistance.

’cause sometimes i want to tell you a thing. 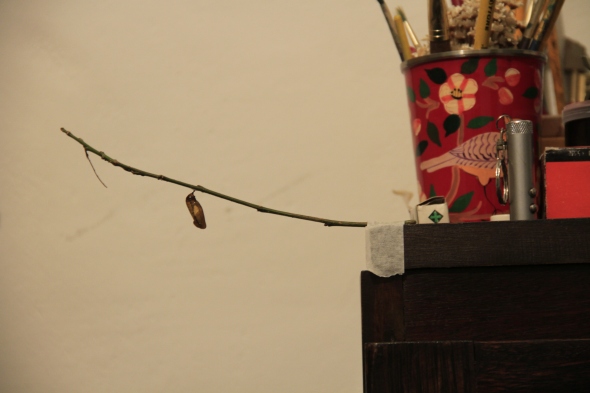 eden is that old-fashioned house

we dwell in every day

without suspecting our abode

until we drive away

how fair, on looking back, the day

we sauntered from the door

discover it no more

you hold my hand tight

if you could know how many shadows

will remain amongst us

in the very moment of your dreams

even when we cannot reach it

we know it is still there – so white –

looking on men and their secrets

as it always has been

tell me a unique word

and if you look that close

you will see simply

a deep square of blue 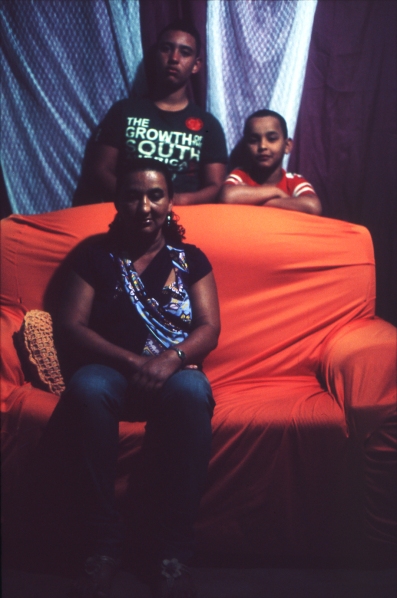 i always thought house was a place of care

and not an imprisonment

at the same time, i locked doors and drawers out

creating a barrier to prevent

strangers to come in and out

this flawed ideia of security

while fear scares me inside

for a long time house was only a room

where books, clothes, and long plays were gathering

while doors and drawers were still locked

did not make possible strangers to come in and out

Oh, table, on which I write!
I thank you with all my heart:
You’ve given a trunk to me –
With goal a table to be –
But keep being the living trunk! –
With – over my head – your leaf, young,
With fresh bark and hot pitch’s tears,
With roots – till the bottom of Earth!
Translated by Yevgeny Bonver, October 22, 2005
** Marina Tsvetaeva is the great Russian poet of 20th century (1892-1941)

A savage inside the cave and the man goes out to hunt.

Ripped in two both sexes.

She will be the womb, he will stay in the midst of

A tamed man cooks and the woman picks her children.

They have never been married.

They met each other cuz he was a migrant

He wanted a home, he was tired to be an errant

She wants only a lover, she had life done.

When I was little, my dad used to say “if you’re lost, I can find you looking for the girl who has three moles like Orion on her thigh and bring back home anywhere you are.” Two out of three are almost gone now and maybe I don’t need them.

of fruits and love* 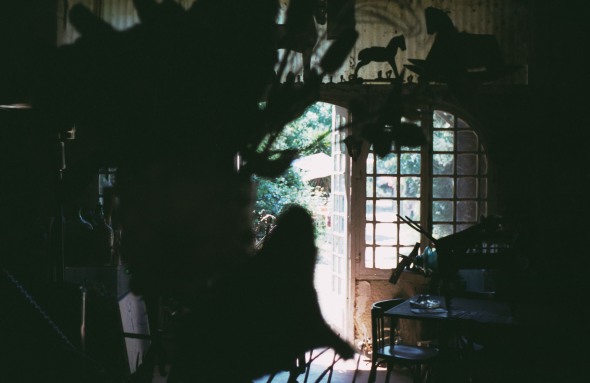 So strange, you see,
these windows so wide don’t get a grip of this city’s infinity.
From our room I see trees-with-branches-with-leaves-with-mangos so big
they could fall and smash someone’s head
and yet they are homelike for me.

(Ever since I was little I look up to the sky in terror:
such greatness must be famished for being so long so blue.
And in a city like this – all turquoise sky, no ocean, no woods –
it will surely feed on a lesser woman
like me.)

That is why (you see)
I need those trees-with-branches-with-leaves-with-mangos-so-big:
so I can hold on to them when the ravenous universe finally sends for me.
And that is why
when the sun is high
I ask you to close all the windows
and throw your body both gently and heavily –
I ask you to throw your body over me.

my love has no meaning 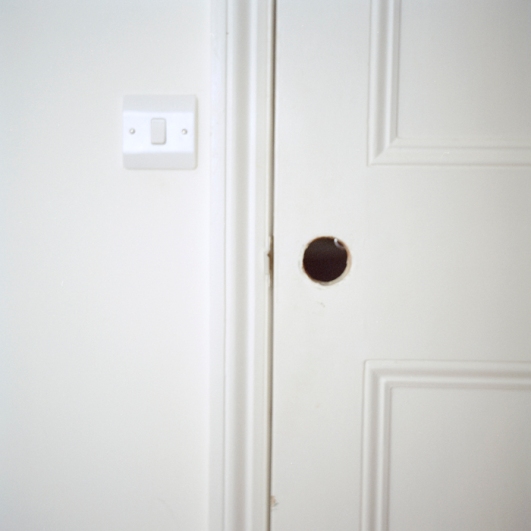 on my writing desk:

a computer, notebooks, faded pictures, some lists to do.

among them rests a small chinese ball you once offered me

on its surface, a delicate blue painted foliage.

love can be that flimsy.

for today, at least for today, i’ll close the windows and turn off lights for the men and children murdered in an indigenous village in brazil.

for today, at least for today, i’ll sing them a song I use to sing to my little boy when he feels threatened. it has no meaning. but i’ll sing it anyway. 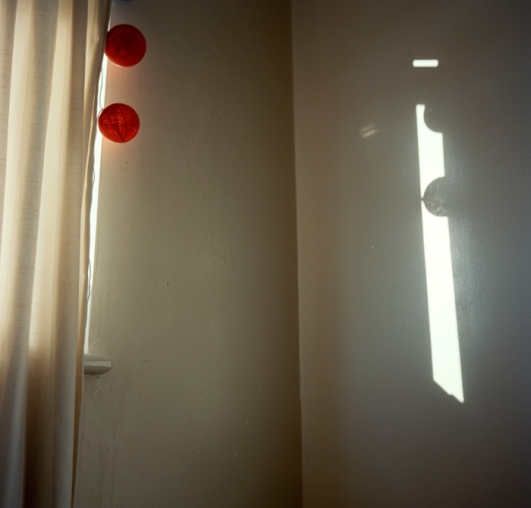 the theme: drawers, chests and wardrobes

For a while we’ve stopped posting here. And we both started wondering why. Yesterday we met by chance on skype and talked about it (a little bit) and life. We always find something potentially interesting when talking about life randomly. It is, probably our method. A fluid, open-ended conversation about minor daily things: my son, your MA, films, books we are reading, and other ordinary situations. We were talking about what to do with our blog, trying to set a new theme and start publishing on it again. What does we have in common, besides “mouse gray” hair, red shoes, accents, photography and books? Our relationship has been marked by such coincidences. And it wasn’t different yesterday.

We were talking about leaving home, about having no more home, at least a traditional home. We are both having to deal with it, in different ways though. How is to live in between two cities and build up a feeling of home on the road, or how to feel at home when you had to leave your home unexpectedly and had no chance do set a new one? And, again, by chance, I wrote you a quotation from Bachelard’s La poétique de l’espace. You were reading it as well. So we decided to understand it better. The coincidences but, mostly, what drove us to this book. We both want to understand the idea of intimacy, of the relationship between exterior and interior, personal objects and spaces, the sense of building a home and live in it, or leave it, of home and its poétique.

So we decided to start writing/picturing to each other again, like the first time, when we fist ‘met’ each other, as a diary, as a description of ordinary time and space of life.

For this theme, we decided to do each post together: one of us will post an image, another – text. We are going to swap every time who will post what, but without indication on it. We try to build one story told by two people. Let’s see how it works.

Trying to fix words up

A letter to Maria

Sorry for not answering your emails and skype calls. Life sometimes can be very tricky. We never know what comes next. I’m back to my hometown after six years. I think it is time to stay close to my beloved ones, at least for now. It’s Fall here and the sky is so blue that is almost impossible not to feel touched by it. I feel deeply touched by ipê trees outside. From my window I can see a pink one. They remember me my mom, she loves them, mostly the yellow ones. Unfortunately I didn’t bring my camera with me, otherwise I would send you a picture of it. It’s funny, don’t’ you think so? A photographer without a camera. It happens sometimes. So I write instead of shot. Let’s start all over again? I can invite you for a cup of tea and we will talk about love, photography, gardens and the days for come.

on theme: tea coffe and something else

I do not know when the words were lost, but it was in the end of winter. These days, I’ve planned a strategy – a strategy of writing or an image. I thought to invite myself to a cup of tea – after the end of writing, I started living things rather than writing them. It was a little disturbing. The word love, for example, existed only in writing. Outside, the word is more simple and quotidian. I can not write about a tea unless I take it. Soon, I will have a cup of tea in a place I like near my house. I will sit, ask for the flavors, and make from this rough writing, my wordless moment.

[Today I saw the first autumm pink Ipê tree – I thought it was worthy to note.]

on the theme – tea coffee and something else

Letter from Luísa (around me)

*Luísa Horta, artist based in Brazil

Letter from Renata (around me)

Around me, small fragments of daily life

In the heart of a babble
My words vanish
gather on the floor
Sometimes, someone stumbles on them
Pay attention
and a question will arise
From the seed word
springs up a clear speech

(eyes in the mirror)

letter from Glaura (around me)

sometimes I go there to eat fresh fruit

I like the beauty of some plastic flowers outside

remembering me japanese gardens I could barely imagine

so tiny and delicate

only the image of a soundless wave

the breathtaking violence of nature

All love ends in a deep sea, at last.

Mumbai. To reach it, you have to write it.  The photography could not. (I could not)

What to do with the canvas you once offered me? Especially me, my sweet, the one who never knows what to do in front of a white surface, a white landscape, in front of any possibility to come? Meanwhile I look at things, not the invisibles ones, but the ones we can touch, even if briefly, with our eyes and hands. All these things without value. Minor things. A piece of a handwritten paper, for an example. The sunflower next to the window. Some book passages. Or remembering the sea. Everything is so tiny. You would say that memory is not touchable. And I disagree. Have you ever tried to lay your body over a memory. It is almost unbearable, but, oh!, how to live without it? I have an inclination towards memories and things with no value. For me, they have said enough.

She has only one child. She calls him: my little grasshopper. He doesn’t know, but she is about to cry.

On the shelf lays a picture of her child. 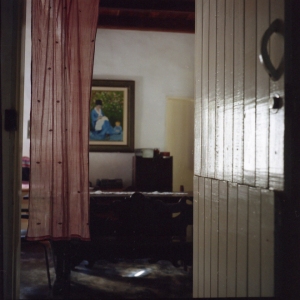 “It happened suddenly. One day I looked in the mirror and I couldn’t recognize myself.”

in the midst of your dreams

One day every single room will be taken by its arms. And from the men who once lived there will rest nothing but the dreams they whispered in the very blue night.

flinging across the sea

touching the clouds
with the tip of feet

* i wanted to write something to you. your letter came to me first.